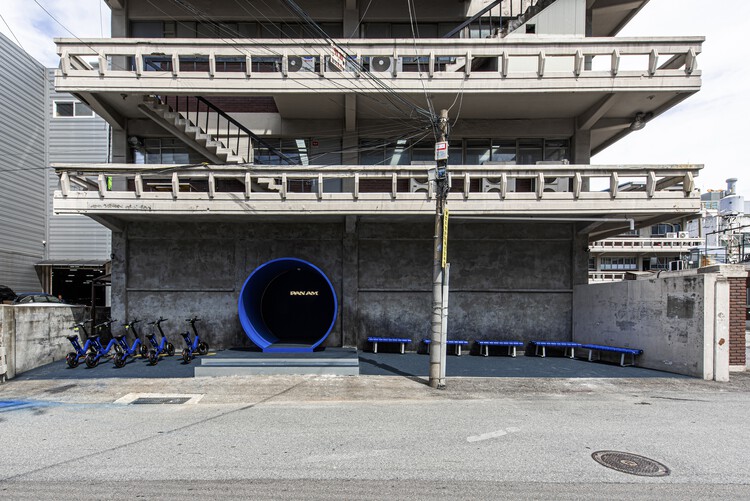 Seongsu-dong is definitely one of the hotspots in Korea these days. Previously, Seongsu-dong was filled with manufacturing workshops, including printing workshops, craft shoe shops, and the leather industry. Presenting past and present in harmony, it has a unique and distinctive culture like no other, now attracting the MZ generation.

In the area, there are various business places consisting of old factories or warehouses representing both the past and the present, as well as many new places adopting these regional characteristics, giving off that unique vibe different from Hongdae or Itaewon. . With mass brands like Dior, Musinsa and LCDC opening flagship stores in the area, Seongsu-dong has become the hottest spot for fashion brands. The recently opened PAN AM flagship store also features the reinterpreted design concept for the regional characteristics of Seongsu-dong.

Our client, who had already opened the LCDC flagship store in Seongsu-dong, asked us to think about the regional characteristics of the region as well as the perspective of the current times, leaving behind the existing image of PAN AM , the retro and old airline that everyone knows, as in the movie “Catch me if you can”. In accordance with our client’s request, we have focused on the fact that the factory that used to manufacture tapes is now transformed into a new place, maintaining the original space, through all the changes in time and pandemic, and proposed the concept of design at the “border of the ordinary and the extraordinary”.

The “border of the ordinary and the extraordinary” that the designer had in mind meant a change, not a separation. While maintaining the old look of the factory, which made tapes, the designer wanted to make the regional characteristics of Seongsu-dong and the brand concept of PAN AM coexist in this newly transformed space. For this, the design concept is represented in such a way that the separation between the old space and the new space is vague, by installing the lights on the glass above the sticky residues of adhesive tapes on the floor, and these Floor lamps unlike ordinary ceiling lights create the extraordinary upside down ambience.

In addition, semi-transparent poly materials and glass are used for the walls dividing the space to give the feeling of overlapping each space, and the openings of each space are designed to be connected to other spaces or to the flow of movement so that spaces and flows of movement can remain vague and inseparable. In addition, the metal frames making up the walls are often overlapped, misaligned or sometimes used as an element connecting the spaces, so that the boundaries can be seen as connected or disconnected.

In order to reflect the regional characteristics of Seongsu-dong, the main entrance of the space and the facade has the cylindrical entrance inserted into the old concrete wall of the factory, in a “T” shape, to divide the flow of movement between entrance and exit, and the interior space is darkened from the outside to arouse the curiosity of the interior. In addition, the cylinder-shaped passage from the entrance to the interior space is designed to create an exciting feeling before a trip. This whole process of entering space through transitional space is meant to represent the metaphor of moving from ordinary reality (outside) to extraordinary space (inside).