This article is co-authored by Otto Waddell, who attended Jerusalem Design Week 2022 on behalf of We Heart, and our long-time collaborator, Dave Waddell.

For the Italian writer Italo Calvino, the city “does not tell its past, but contains it like the lines of a hand”. Few cities hold more lines on their metaphorical hands than Jerusalem, which is around 6,500 years old, has been occupied by multiple civilizations including the Persian, Roman, Ottoman and British empires, and is holy to Jews, Christians and Muslims. Small surprise therefore that it is home to no less than 60 museums and 2,000 active archaeological sites. To walk the streets is to browse some of the oldest texts in the world.

Which does not mean that Calvino’s verses speak only of the past. If Jerusalem is the most extraordinary of living museums, then that’s only half the story, because to take the metaphor a little further, there’s a lot, even in this most historic city of cities, that speaks not only of today but also of the future: venture capital has found it the most suitable; he is known for his support of the technology start-up; it has proven to be a sweet spot for many well-known brands; and long residences suggest a city full of hope. Outside the old city walls is a modern cosmopolitan city, a city that tells tales of much younger settlements, of people from all over the world, who came to the land of milk and honey.

And yet, at the same time, Jerusalem finds itself at the center of a long and seemingly intractable conflict between Palestine and Israel, a conflict so intractable that it leaves the world completely perplexed as to what to do: the two countries claim Jerusalem as their own and not can decide who is right, even if it is Palestine that suffers: the Gaza Strip is one of the most overpopulated and poorest lands in the world. Meanwhile, Israel is surrounded by enemy states, on constant alert.

Some, but not all, of this rich and complicated time was evident when I emerged from my hotel last month in search of several forgotten items: sunglasses, a hat, sunscreen and a belt. The first three had everything to do with saving me from 34 degree heat; the latter would save me the embarrassment of having my shorts fall off when I needed to use both hands for something other than holding them.

The Old Town market was everything I had hoped for: noisy, full, chaotic, ready to rob me of every shekel I had. 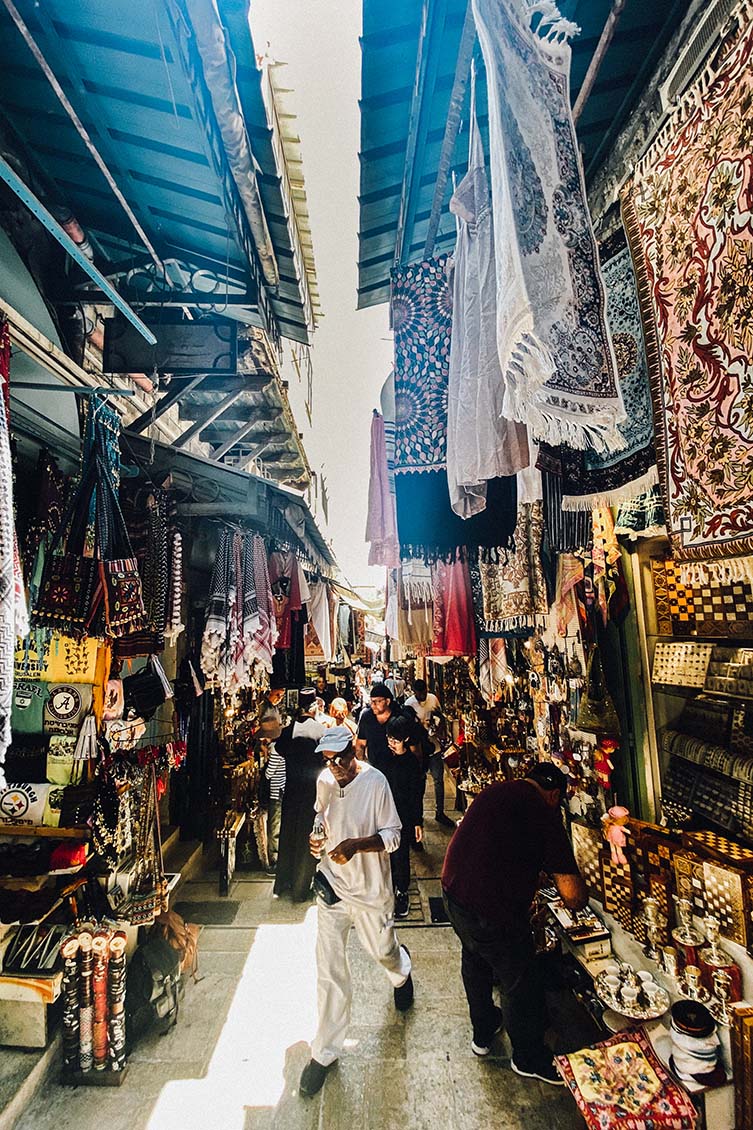 A quick Google where to go had sent me in the direction of the Old Town Market. I left for a 20 minute walk, my shorts very low. The occasional imposing historic building marked the skyline. Everyday stores and supermarkets shared space with high street brands – Footlocker, Tommy Hilfiger, etc. Ultra-Orthodox Jews walked past me. Soldiers stood in pairs on street corners. A group of children were playing football in the street, one wearing a T-shirt emblazoned with an AK 47.

The market, when I found it, was everything I had hoped for – noisy, full, chaotic, ready to strip me of every shekel I had. I left after an hour of great haggling, everyone winning. 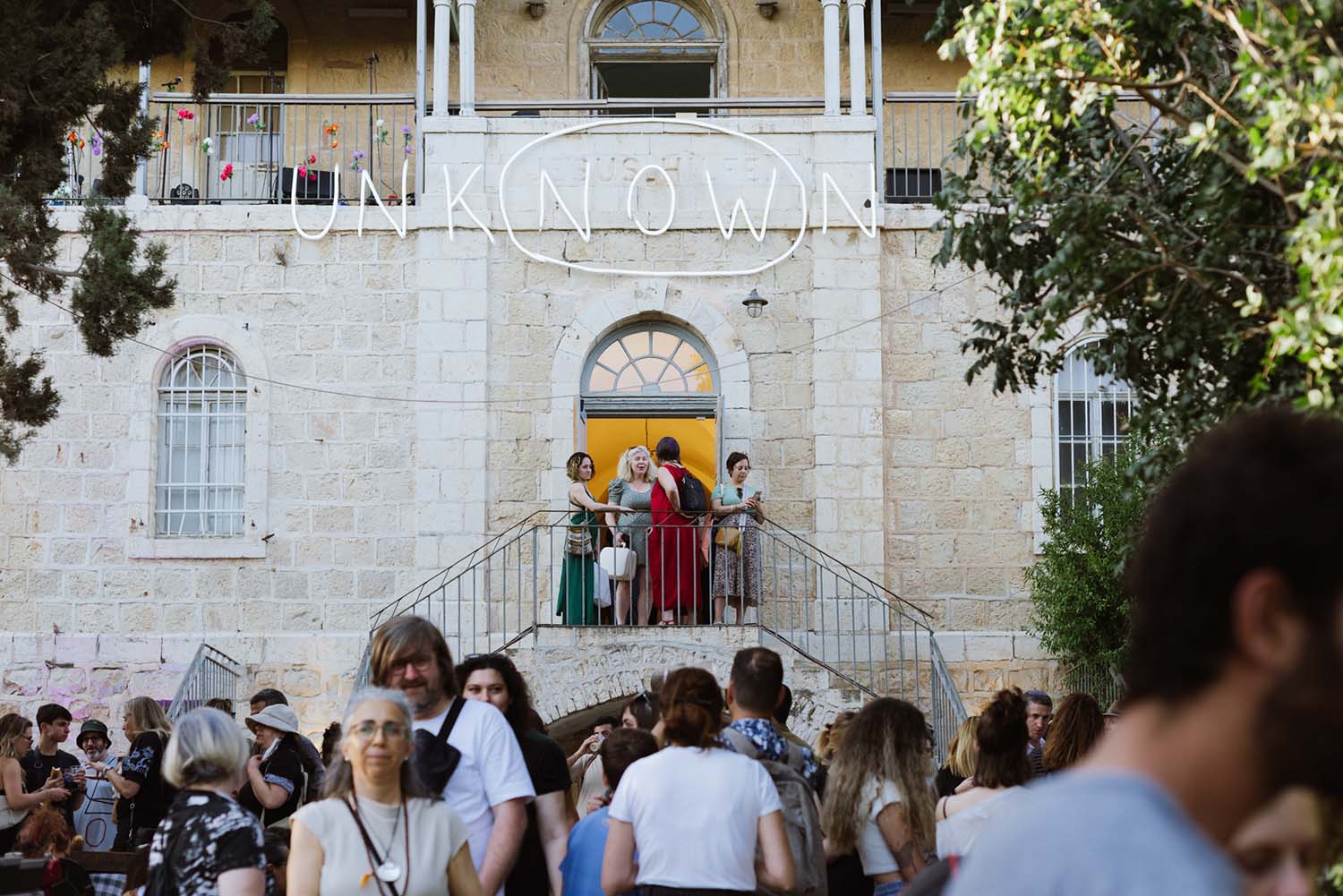 Given this city of deep time and deep uncertainty, it is both odd and oddly fitting that the theme for this year’s Jerusalem Design Week, which I was fortunate enough to attend, is For the moment. Held last month, at Hansen House, it invited local and international designers to create works that “explored both the ephemeral of design” as well as, as its curators Tal Erez and Anat Safran told us , “the design of the ephemeral”.

An increasingly unpredictable future and an increasingly incredible past have conspired to create the ever-narrower slice of time we call the present, and that’s the job of design, says For the moment, to approach, to illuminate or to show a way towards at least the “short future” and the “short past”. It is towards design, in other words, that we must turn to the truth of things. The design is not Fox News or Facebook. He’s not a politician. It’s not bullshit. 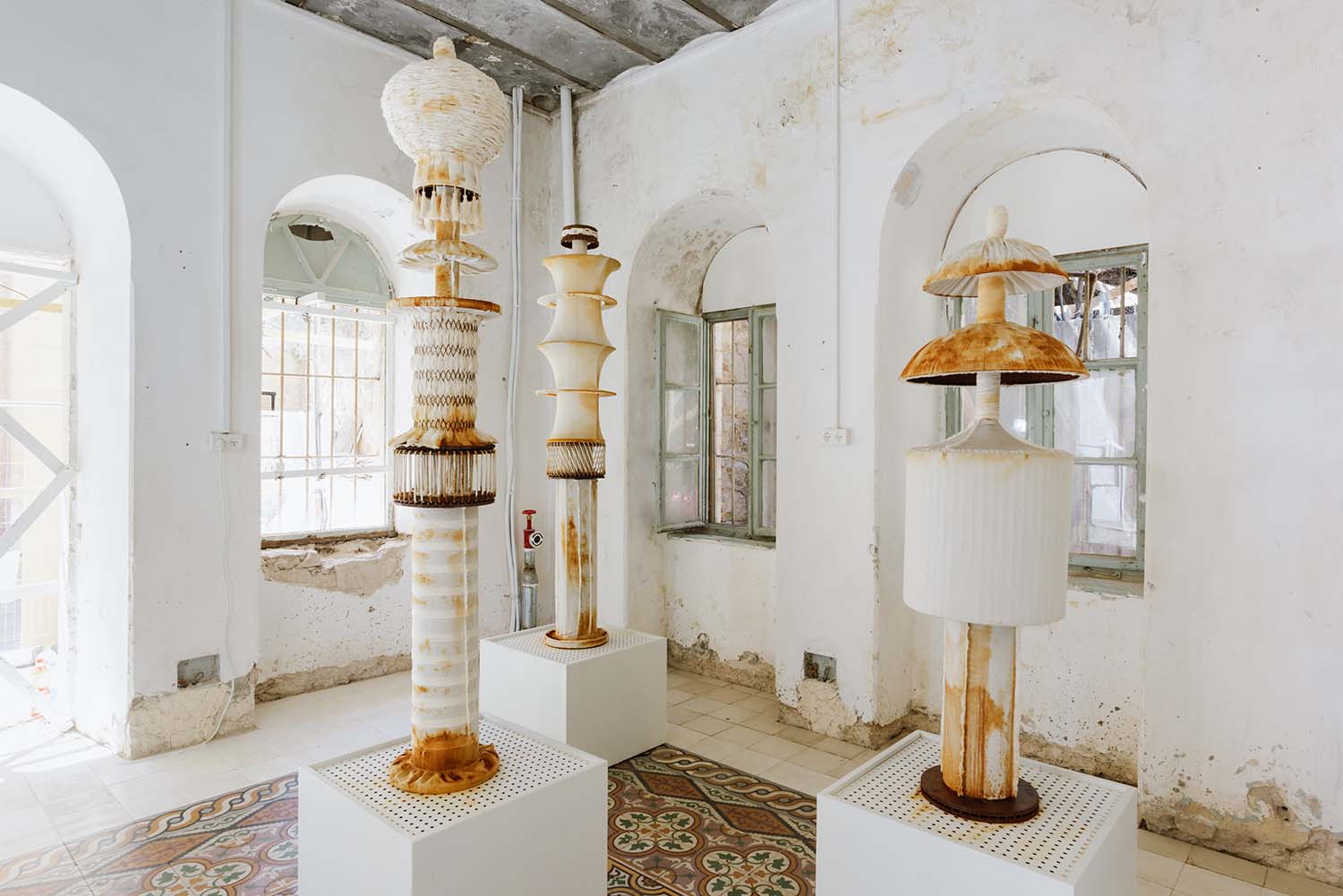 You may or may not take this with a big pinch of salt. Personally, I love it, and I loved the exhibit. The Hansen House itself and its grounds are magnificent, and the event has traditionally had a decidedly celebratory atmosphere, particularly on the opening and closing nights, and For the moment was no different: During my short stay, I went to opening night, which featured a band (and their excellent screaming singer) on the house balcony; and had lunch at the venue’s restaurant and dined with the curators at a restaurant called Satya.

In the meantime, I spent most of my time meeting the creators and discovering their works, installed either outside, in the garden, or in the inner courtyard of the house, or in one of its many parts.

In total, there are 150 exhibitions, projects or installations to For the momentall inspired not only by the theme of the exhibition, but also by the curator’s claim, reasonably unusual for a design event, to “promote design not from a commercial point of view, but from a positive social” – more at the art-theory-design end of the design spectrum at the time, although there was a lot of work to explore new and old technologies. 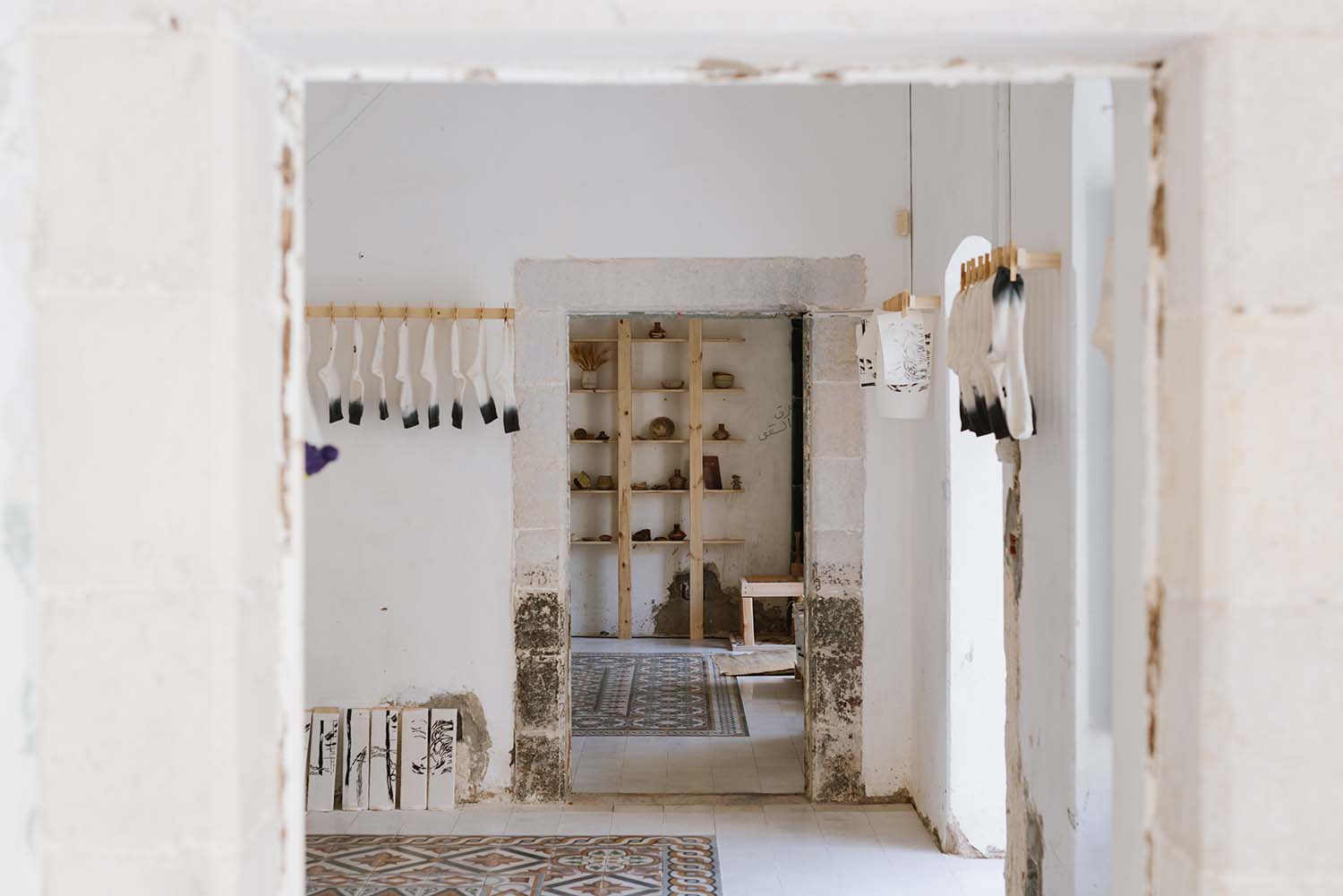 I have to be honest: I’m not sure I managed to see the 150; however, I saw quite a few and enjoyed meeting the designers. My absolute favourites: Tidhar Zagagi’s Pixel shoeby Adar Neder Mallel and Tamar Levinger fast movementand Assaf Cohen et al. OOO.

Already a legend, Israeli industrial designer Zagagi has developed a method using PU foam to mold shoes onto specially provided socks. (Unfortunately, I may be the only one of the 5,500 visitors who attended For the moment whose feet were too big to fit in Zagagi’s cast. I filed a formal complaint with Mr. Zagagi). 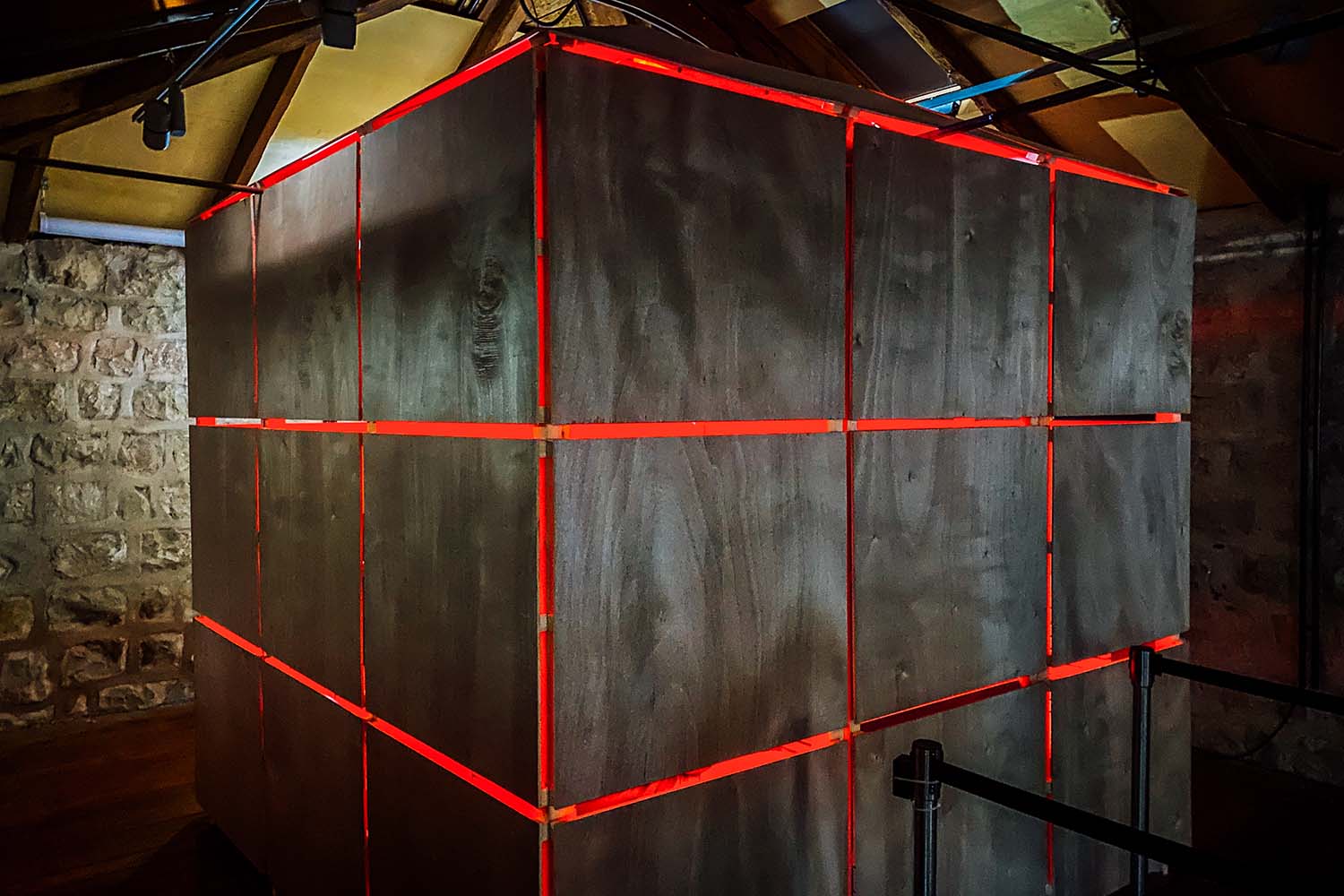 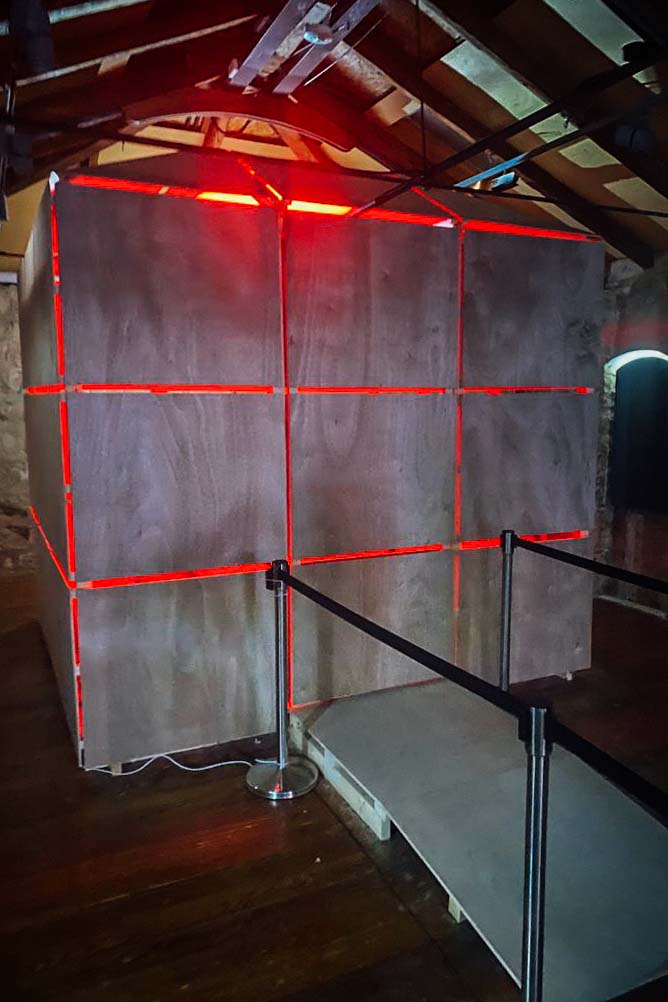 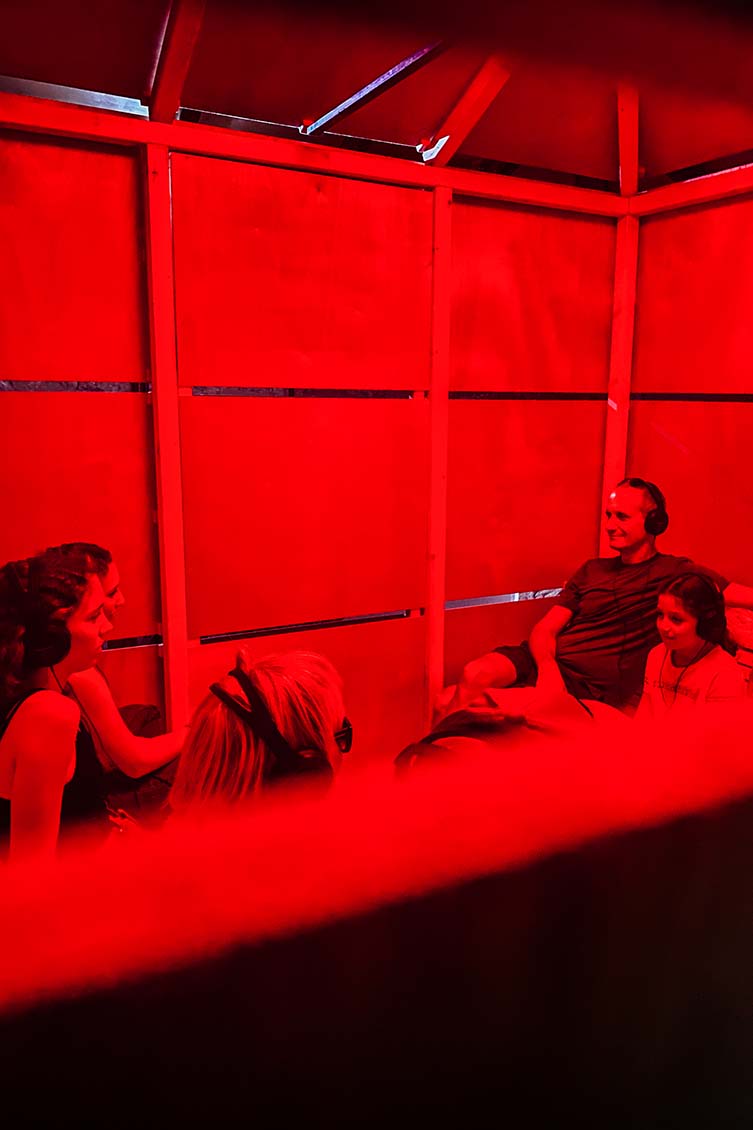 I liked Mallel and Levinger fast movement for completely different reasons: inspired by the practice of hormesis (micro-dosing of toxins to boost immunity, etc.), it’s a fake sauna bathed in a kind of red light that few of us admit knowing. Once inside and settled in, you have to sit and stare into a stranger’s eyes and follow uncomfortable directions through a handy pair of headphones. Although there is no real heat in the sauna, you leave with a feeling of warmth. 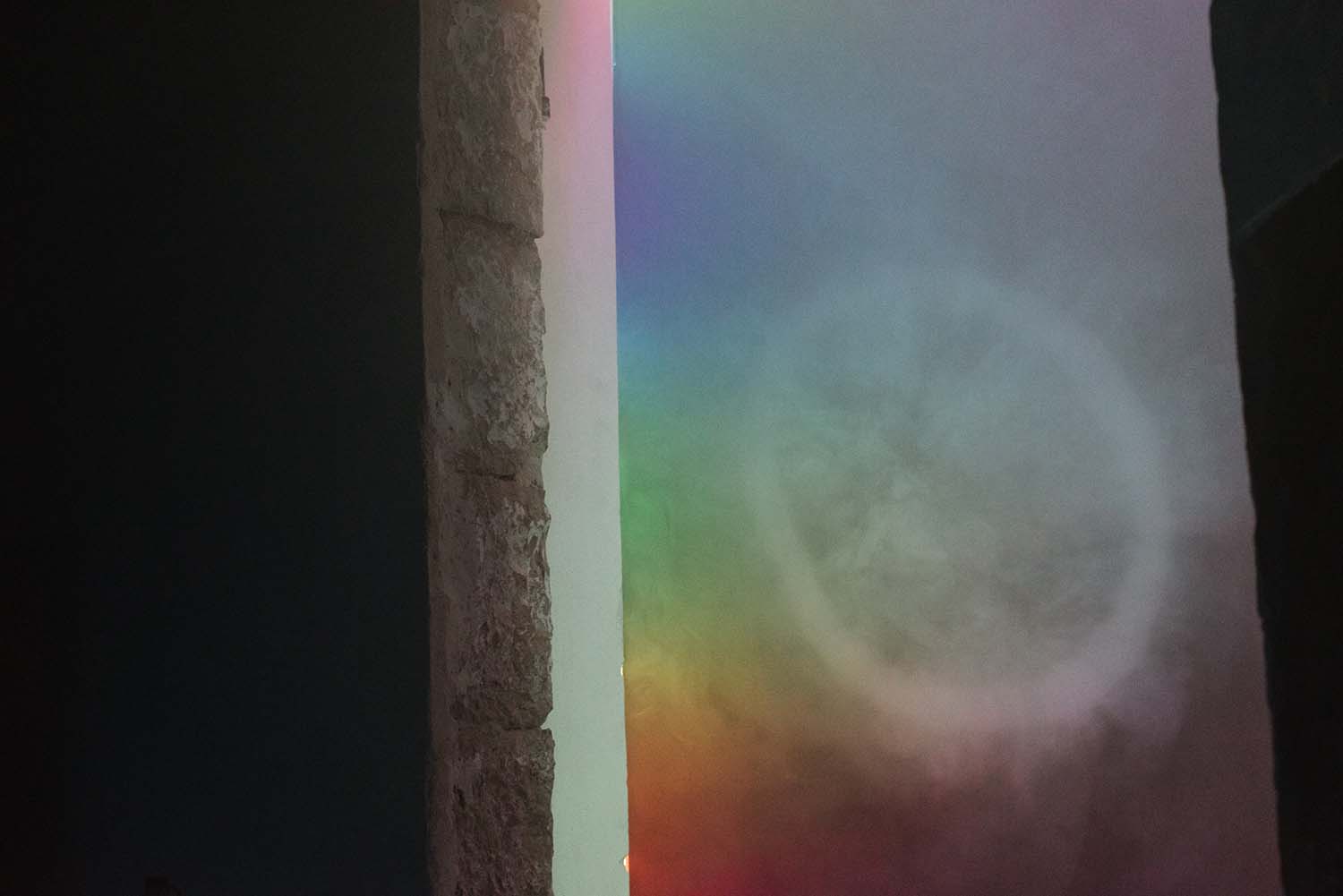 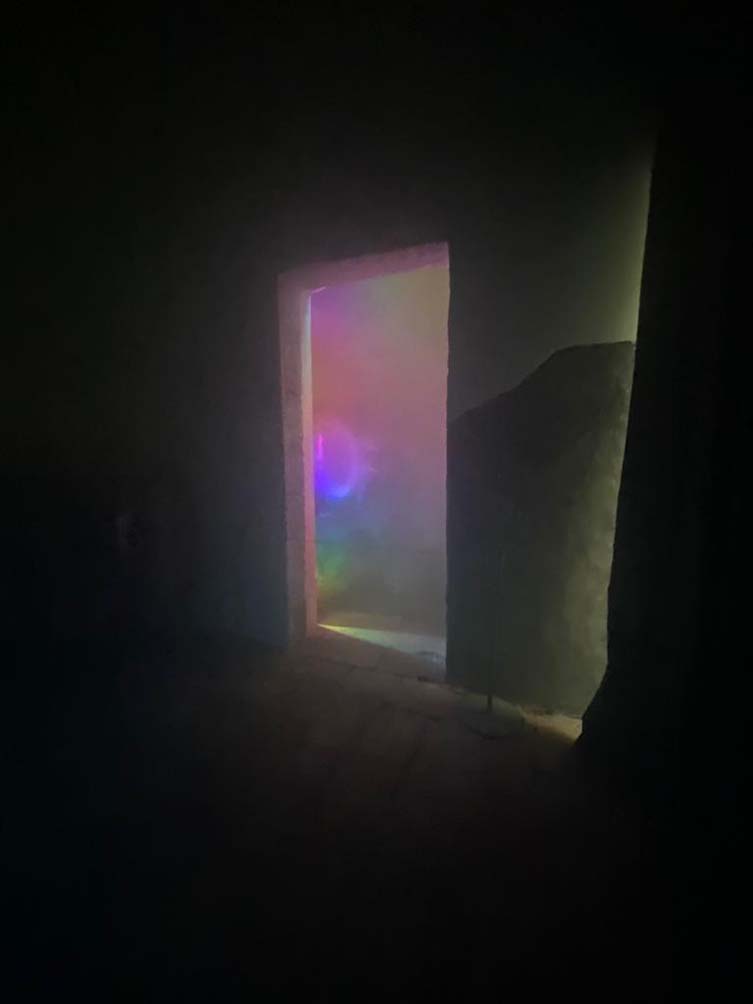 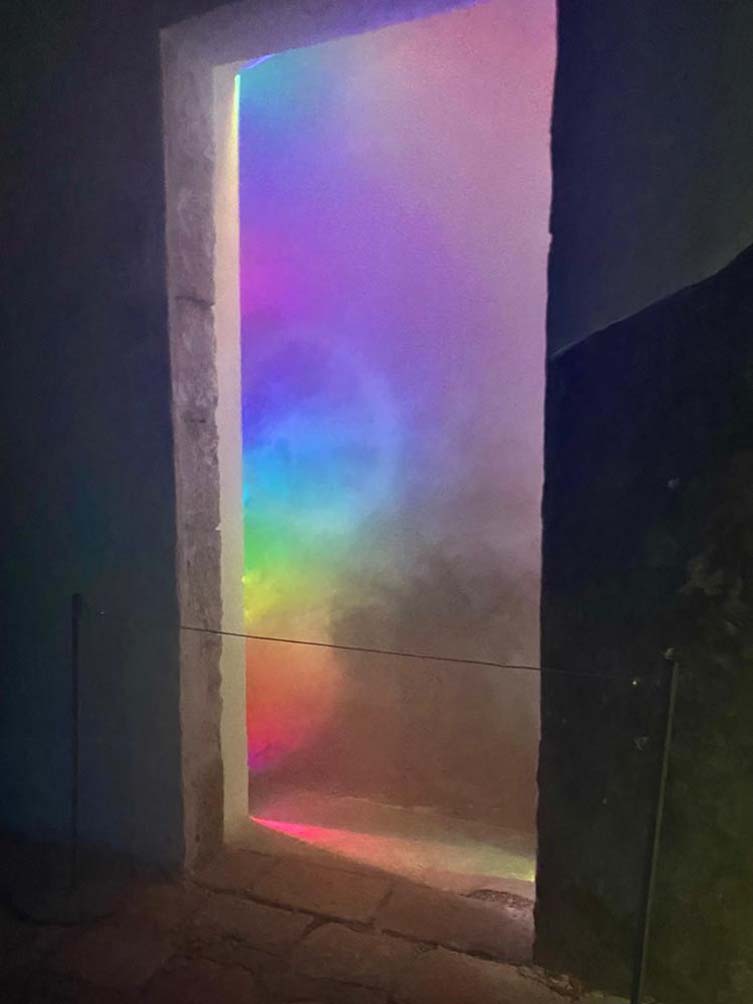 Finally, while the reflection behind OOO of Cohen and his colleagues Shai Dror, Yonatan Dahan and Yosef Mashiach talk about “a mechanism that generates perishable objects and time samples of their short lives”, I imagined it more like a short round god sitting in a room lit in the colors of the rainbow a puffing smoke echoes through the open door. It was a special moment.

I could have stayed another week. Time, however, was not on my side, and in more ways than even Calvino could have imagined. A very early morning taxi to Ben Gurion International Airport ended up with a two hour delayed flight causing me to miss my onward connection in Athens causing me to miss the first day of the my uncle’s bachelor party, which made me miss – and here time was once again my good friend – his escalation in nothing but a gold mankini. Time is a funny thing. 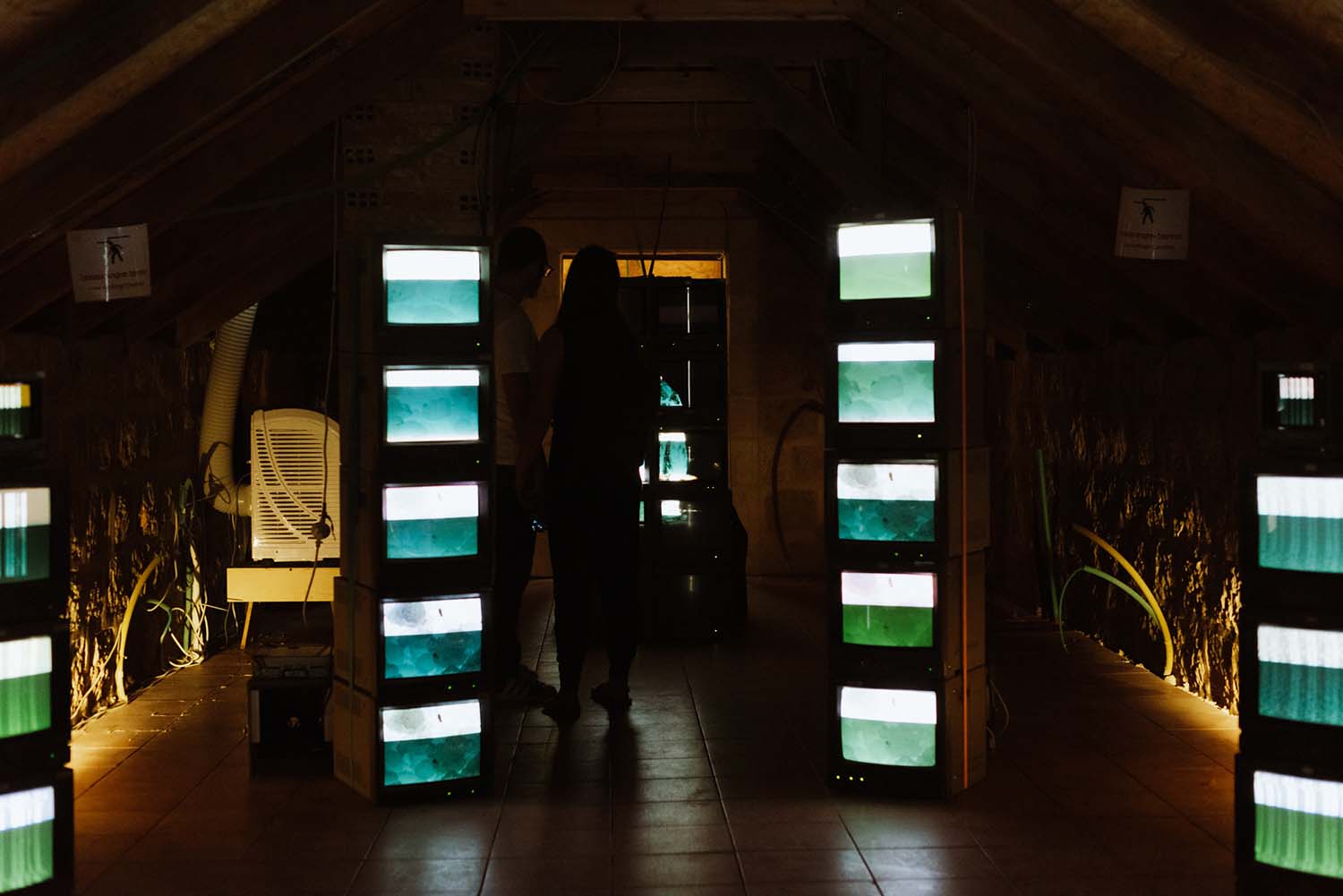 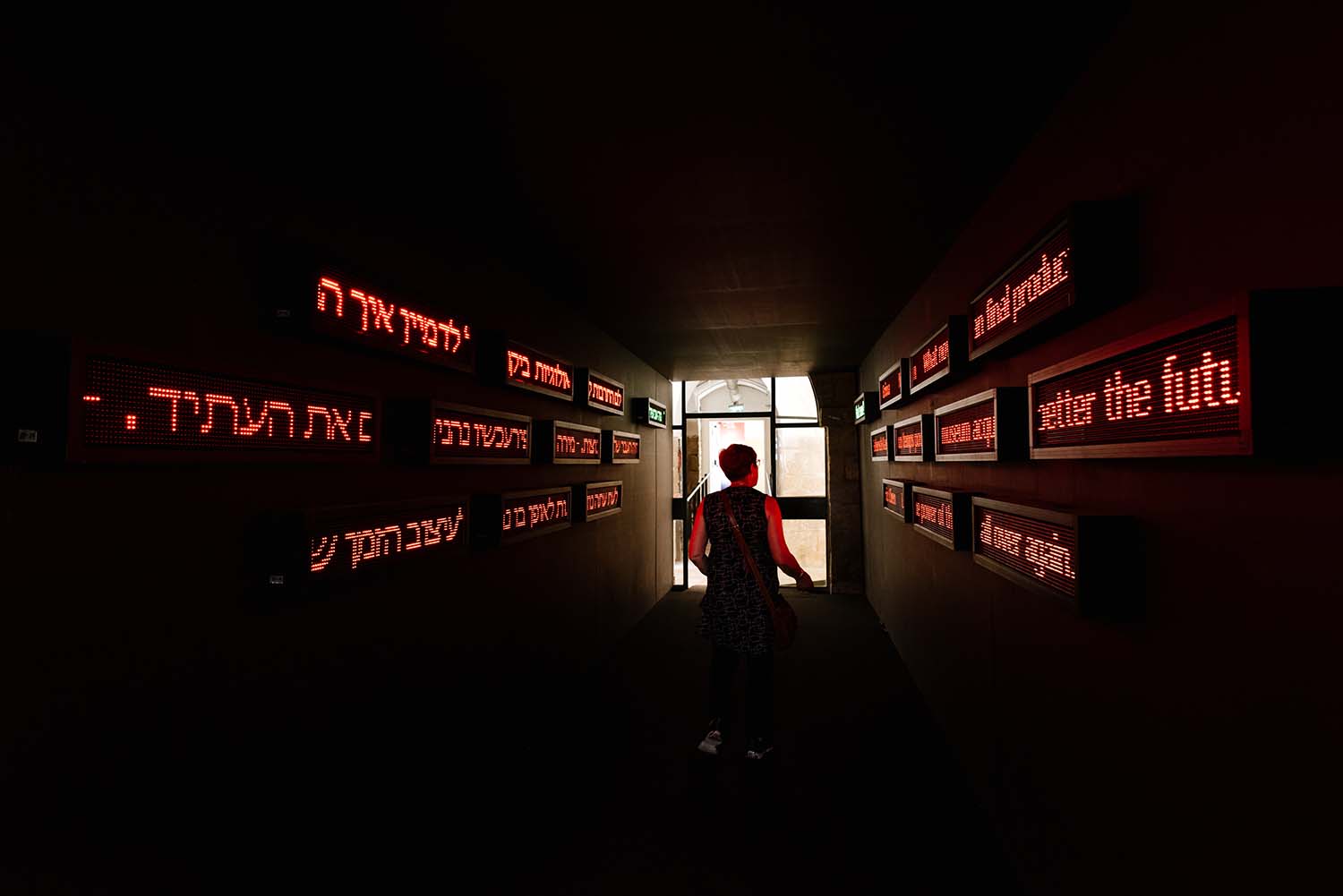 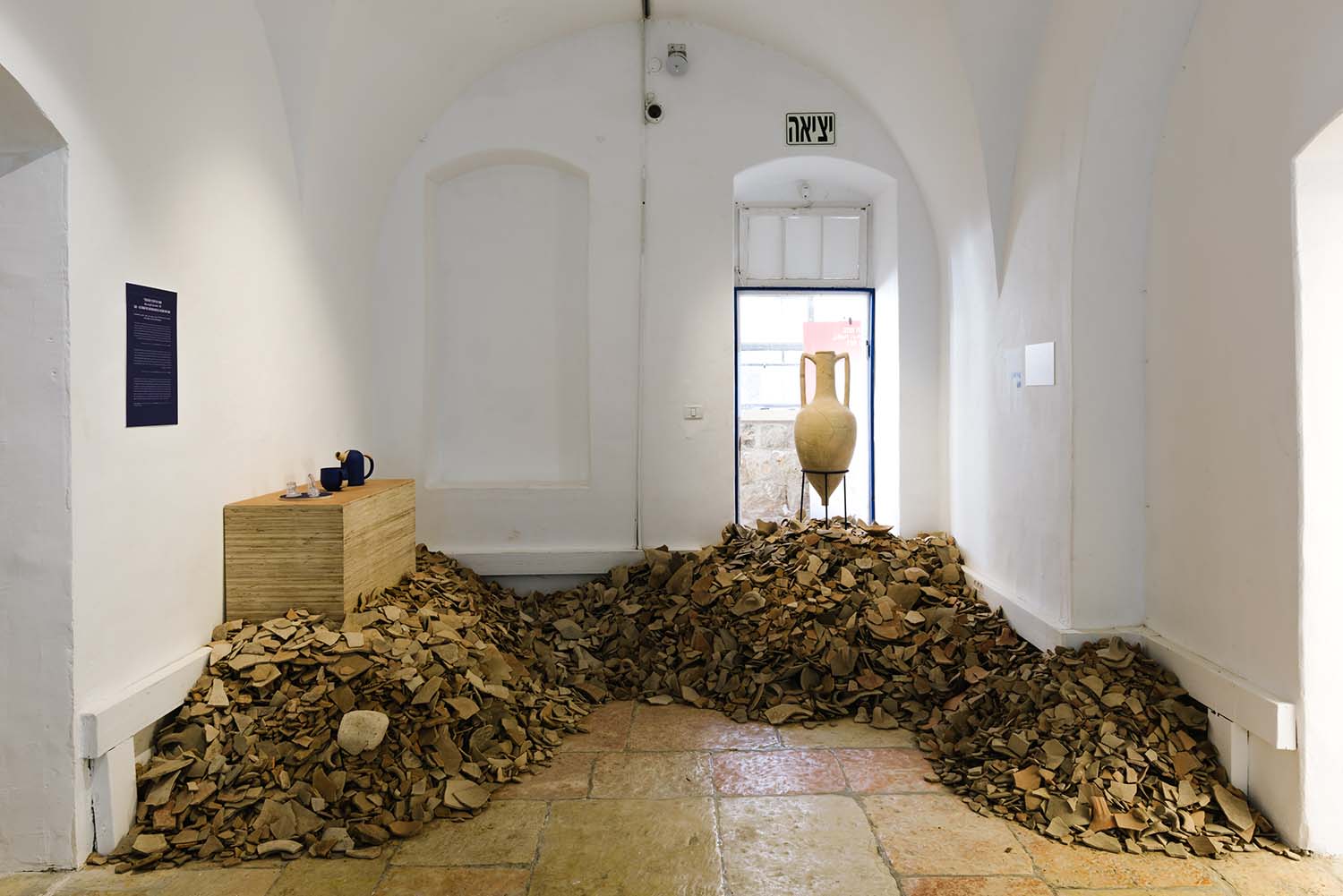