Beyond video conferencing via Zoom, there’s perhaps no brand more synonymous with the change in habits many of us have made during the pandemic like Platoon. The brand’s connected fitness bike revolutionized the stationary bike category, pairing sleek hardware with live instructor-led programs to inspire legions of dedicated cyclists to pedal away from the comforts of their own homes (note that Peloton exists for about a decade now).

While those golden days of sales in 2020 – when gyms were closed and Peloton raced ahead like the home training of the day – turned out to be a period of coasting downhill, today Peloton finds itself struggling with a climb, the victim of another change of course as people return to reopened gyms, the demand for high-end home fitness equipment is softening and a new generation of copycat competitors has emerged, offering different modes of motion – rowers, climbers, strength trainers and other stationary bikes – each picking up the details and the features that initially convinced millions of people to invest in home workouts.

Even so, Peloton’s staying power as the preeminent brand in connected fitness remains strong. Although they have continued to diversify their catalog of equipment – including a treadmill and, more recently, a wearable optical heart rate monitor – their cardio bikes remain the cornerstone of the Peloton experience, with their top-of-the-line bike range + most upscale. an expression of the brand’s “when you want it” philosophy.

Part of Peloton’s success can be attributed to the fact that they designed exercise equipment that was not only acceptable for the home, but aesthetically welcomed to live prominently in spaces large and small, which no is no small feat considering that exercise equipment is usually relegated to out-of-view spaces. We spoke with Jason PourePeloton’s Industrial Design Manager for more details on what goes into making a Peloton product.

The stationary home exercise bike was somewhat of a standardized form before the Peloton bike came along. Could you explain what sets the Peloton bikes apart from that predecessor, both as a physical object and also as a means of experiential movement?

We started from the idea that the Bike+ would be a sculptural object, a design rooted in emotion. Many elements of the stock frame are sculptural – for example, you can follow the sculpted shoulders leading to the forks, which you wouldn’t see on a traditional spin bike.

Our goal was to design an object of desire that was created with form in purpose, focusing on three main values: 1. honesty, 2. being personal, and 3. including an element of dynamics. In the case of honesty, I refer to the physical execution and the choice of materials. We used unibody construction rather than using a subframe with additional plastics like the other bikes; it was a decision reflecting honesty about what materials we would use and where, all to create form and function in the same gesture. 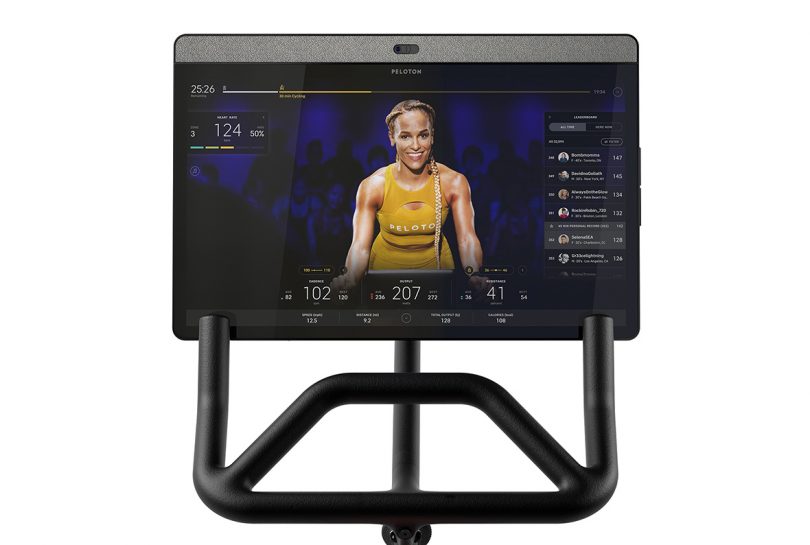 Another example is the rotating touch screen of the 24-inch HD tablet. We always wanted to incorporate textiles on the back as a visual and textural detail, but we also wanted to make sure there was a purpose and a reason for it to be there. As designers, we love textiles…we think textiles are cool and we’re into trying to put those nice little touches on things. Luckily, we’ve found our reason: audio. The shelf hollows out the rear and shows where the two rear-facing woofers reside: under an acoustic textile. Even though it is a static object, it still adds a certain dynamic nature to it. 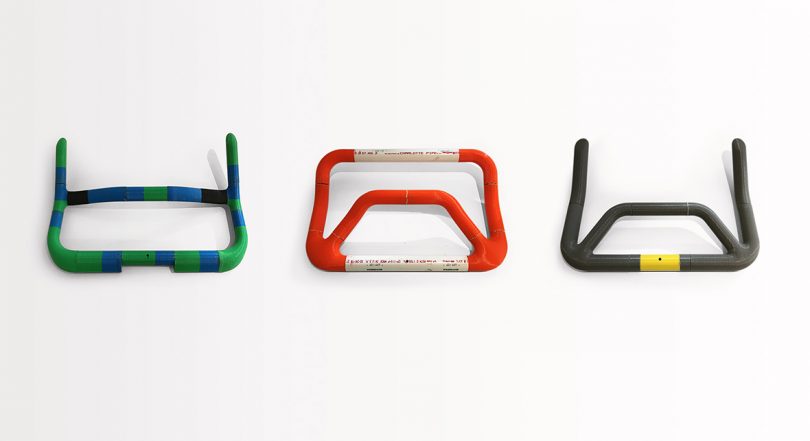 Let’s talk about the bullhorn handlebar. They are integral to rider comfort as well as the feel/perception of riding a real bike. How did your team arrive at the final form and setup?

A lot of our decisions revolved around how intimately the handlebars would integrate in coordination with the screen. We had to do – I don’t know – 50 prototypes of not only different types of handlebar form factors, but also mock-ups in an effort to figure out the optimal angular position. 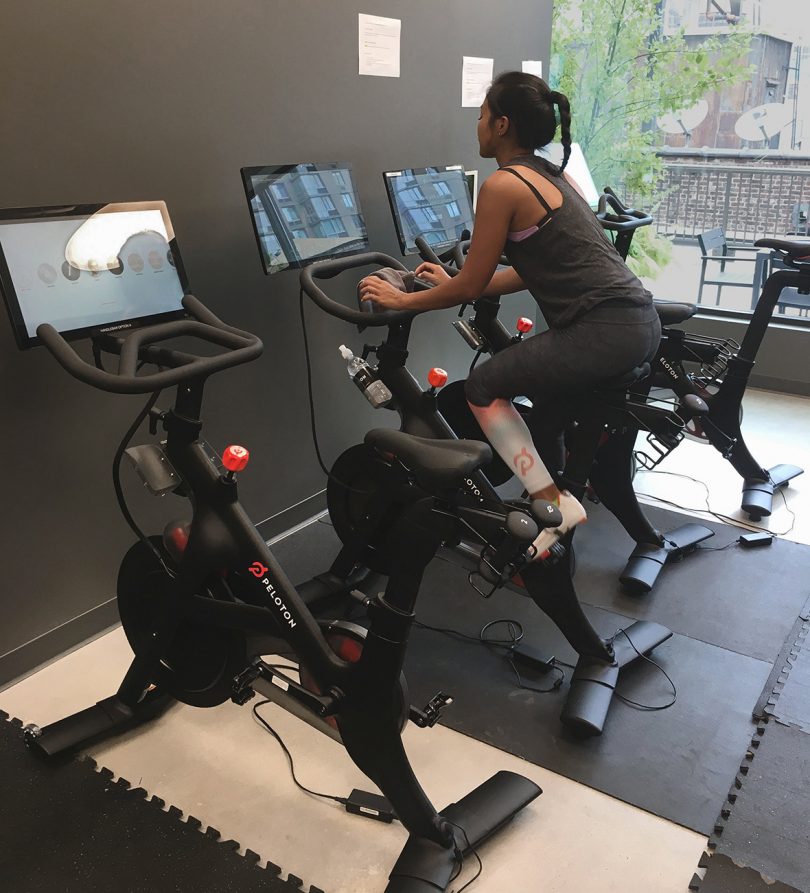 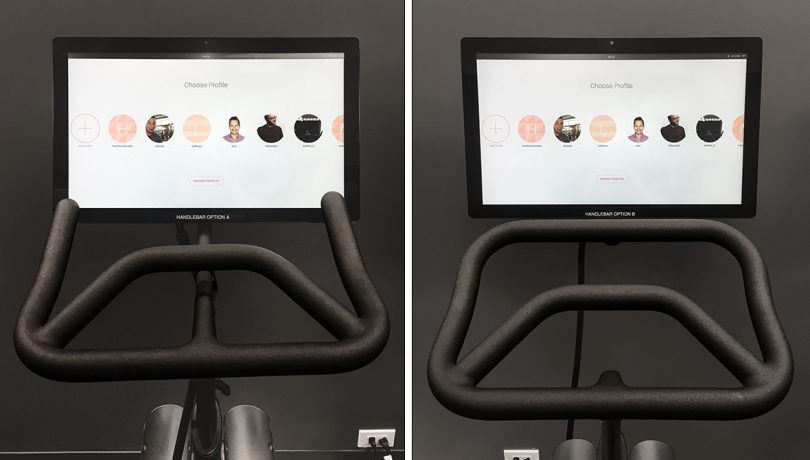 Interestingly, the screen and the handlebar were not designed simply in parallel, but in direct relation to each other rather than separately to ensure ergonomic integration? The screen wasn’t just nailed down.

Of course, we still have to develop a tablet that looks good, and all that, but it doesn’t happen in a silo. This must be done as part of the whole system. 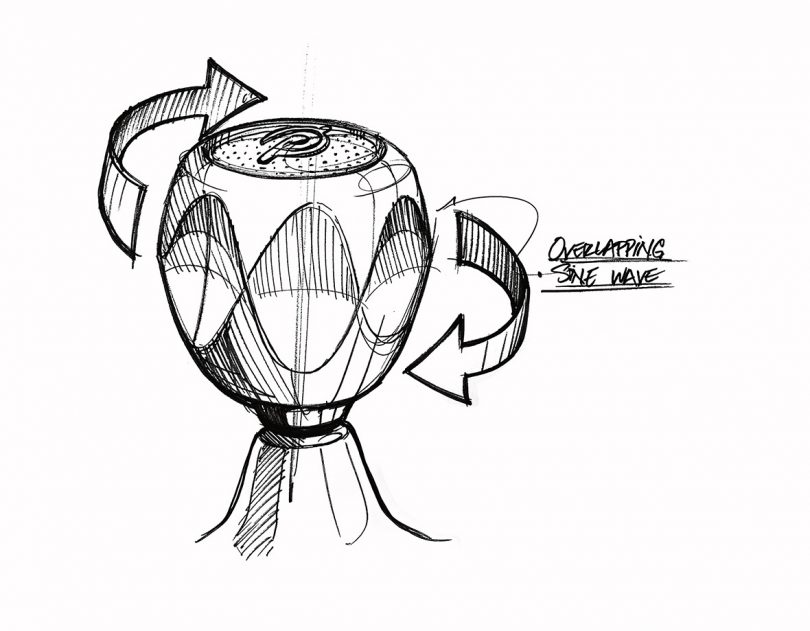 How did the team determine which controls would remain touch-sensitive or accessible using the screen?

The basis of all our design decisions begins with finding the essence of the product. We love the interaction between man and machine. For example, the interaction of the physical modification of the resistance using the button. It’s so important to feel physically involved in every aspect of training. The dial is a primary contact point, the very essence of cycling. We have buckets and buckets and buckets of button designs. This was a point of obsession, as we saw the button as a way to communicate visual design language DNA through a simple object. [The knob] is a centerpiece, a jewel-like touchpoint for the user to feel physically engaged with the brand. 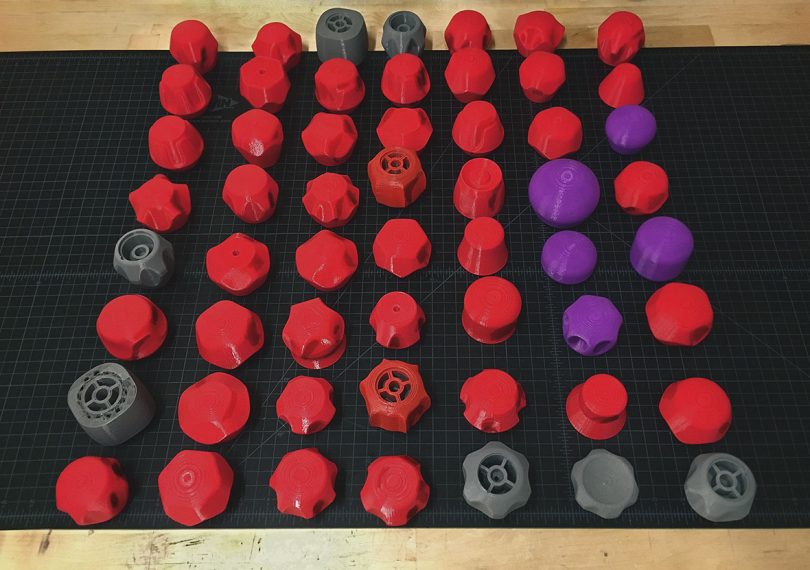 No buckets in sight, but lots of 3D printed button prototypes.

But we also thought of our users when they sweat heavily for 45 minutes, when maybe they don’t have a good joint in their hands. Navigating a UX/UI with fine motor movements may not be realistic. So we thought of designing big “I’m tired” gestures so that anyone can easily throw the button left and right. [to adjust difficulty].

The cool thing about Bike+ is that tuning can now be automated; runners have the option to adjust it themselves or have the program adjust it up and down for them, which is super, super cool. I never thought I would like it so much. It’s a really cool automated feature that allows the rider to switch back and forth between digital and analog as needed. 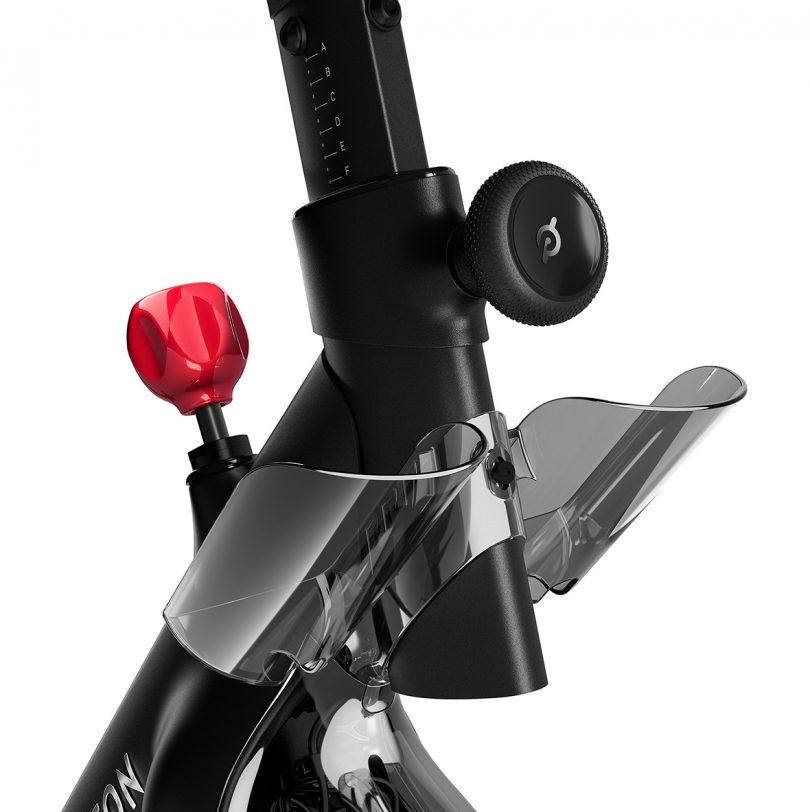 Take a big picture perspective – the gym equipment industry has always been subject to slow, incremental change. Gym machines from 10 years ago are mostly the same. Does Peloton see itself changing design at a pace similar to that of the tech sphere rather than the traditional exercise equipment industry?

The One Bike version has had a very solid life. It was announced in 2012 on Kickstarter and started selling in 2014, and it’s still on the market today. We have since updated the tablet and also launched Bike+. When we designed Bike+, we started out loving the stock frame. When we started, we said to ourselves: “We are not going to touch the frame. But we touched every part of the Bike+ frame; we ended up modifying it gradually throughout the design process.

We don’t have anyone from the fitness area on our design team. I worked for 10 years in the housewares industry. I used to design spoons. I am also used to designing large objects and diagnostic equipment and medical equipment. How do you go from spoons to bike design? But I think the parallel between all the categories is materiality and design can kind of transcend the product, allowing designers to be able to jump from vertical to vertical.

In fact, we don’t have anyone from the fitness area. We have shoe designers for Reebok, CMF designers for Logitech, Microsoft and Nokia. Ex-Googlers. The folks at Steelcase. A super diverse and very talented team. 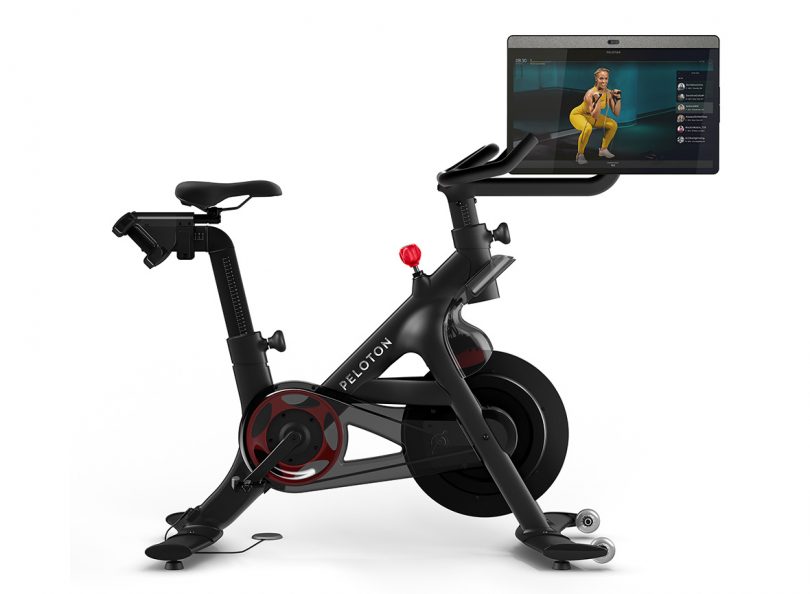 But to answer your question about how Peloton sees itself, we don’t necessarily consider ourselves a fitness company. We see ourselves through the lens of being a technology company, a content company and creating a Peloton experience. Our goal is not just to continually proliferate into new categories, but to focus on guiding, coaching, and engaging with our members through the Peloton ecosystem. It represents the literal evolution of the product within Peloton, going from something simply in terms of industrial design to something more accessible compared to the rest of the industry. We will therefore continue to try to simplify the experience – hardware and software – down to its most basic elements while continuing to improve the UX/UI of the pen display.

Gregory Han is Technical Editor of Design Milk. Originally from Los Angeles with a deep love and curiosity for design, hiking, tidal pools and road trips, a selection of his adventures and musings can be found at gregoryhan.com.