Vegetable growers in the Region of Murcia grow their produce under low rainfall and many hours of sunshine. These climatic characteristics, beneficial for crops, are the main reason for the use of padding. The Biodegradable Padding Task Force was created to address these issues. To do this, the Task Force is carrying out the ACBD+ innovation project, which aims to formulate biodegradable padding that meets the particularities of this Region and which degrades naturally as soon as possible after use. “We plan to use indigenous microorganisms to achieve this,” said Abelardo Hernandez, technical director of Proexport and coordinator of ACBD+.

The ACBD+ innovation project is made up of the companies Verdimed, Grupo CFM, Bonduelle, Kernel Export, Campo de Lorca, Primaflor, Grupo G’s and Florette under the coordination of the Association of Fruit and Vegetable Producers and Exporters of the Region of Murcia (PROEXPORT). The European Union, through EAFRD funds and the Autonomous Community of the Region of Murcia, is financing the initiative with 191,000 euros.

ACBD+ works with the innovation centers CETEC (Footwear and Plastic Technology Center of the Region of Murcia) and CEBAS-CSIC (Center of Edaphology and Applied Biology of Segura). 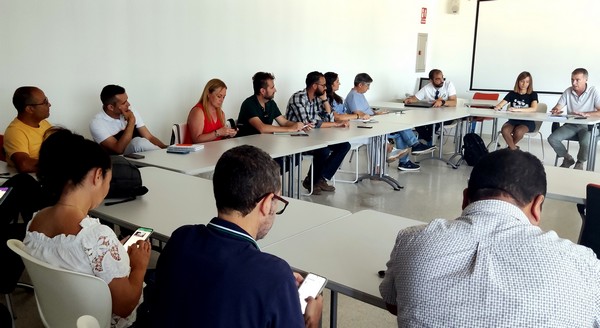 “At CETEC we are working on obtaining two formulations of biodegradable padding in the soil, adapted to the agroclimatic conditions of the region of Murcia and which are prepared in our pilot plant”, said Lupe Leon Sanchez, doctor of sciences of l environment at the R+D+i department.

To do this, several tests are carried out in the laboratory of the plastic materials created, which analyze the mechanical resistance of the formulations, carry out accelerated aging tests in sunlight in a UV chamber, and tests of disintegration and biodegradability in the soil. , simulating the conditions of crop fields, with and without the inoculum of microorganisms prepared by CEBAS.

“The objective of these tests is to evaluate the rate of biodegradation of the formulations created, comparing them to commercial biodegradable fillings usually used, and if necessary, to modify them to adapt them to the agroclimatic conditions of the south-east of the Spain,” she said.

For its part, the CEBAS-CSIC Soil Enzymology and Bioremediation team is studying the use of micro-organisms to accelerate the degradation of biodegradable plastics in end-of-life soils. “This will benefit us in two ways. On the one hand, it will reduce the time biodegradable plastics stay in the soil, and on the other hand, it will improve the quality of the soil and the crop,” said Margarita Ros, research scientist.